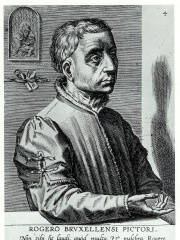 Rogier van der Weyden (Dutch: [roːˈɣiːr vɑn dɛr ˈʋɛi̯də(n)]) or Roger de la Pasture (1399 or 1400 – 18 June 1464) was an Early Netherlandish painter whose surviving works consist mainly of religious triptychs, altarpieces and commissioned single and diptych portraits. He was highly successful and internationally famous in his lifetime; his paintings were exported – or taken – to Italy and Spain, and he received commissions from, amongst others, Philip the Good, Netherlandish nobility, and foreign princes. By the latter half of the 15th century, he had eclipsed Jan van Eyck in popularity. Read more on Wikipedia

Since 2007, the English Wikipedia page of Rogier van der Weyden has received more than 439,528 page views. His biography is available in 57 different languages on Wikipedia making him the 70th most popular painter.