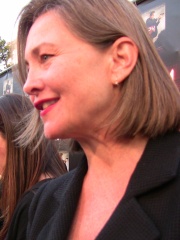 Cherry Jones (born November 21, 1956) is an American actress. A five-time Tony Award nominee for her work on Broadway, she has twice won the Tony Award for Best Actress in a Play: for the 1995 revival of The Heiress and for the 2005 original production of Doubt. She has also won three Emmy Awards, winning the Outstanding Supporting Actress in a Drama Series in 2009 for her role as Allison Taylor on the FOX television series 24, and twice winning the Outstanding Guest Actress in a Drama Series for her performances in The Handmaid's Tale and Succession. Read more on Wikipedia

Among actors, Cherry Jones ranks 2,414 out of 10,030. Before her are Belinda Lee, Cathy O'Donnell, Tonie Marshall, David Tomlinson, Tim Russ, and Michael Winslow. After her are Billy Boyd, Peter Strauss, Rob Lowe, Lesley-Anne Down, Hayden Christensen, and Sarah Rafferty.