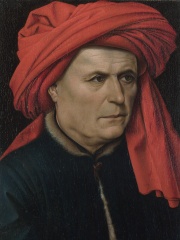 Robert Campin (c. 1375 – 26 April 1444), now usually identified with the Master of Flémalle (earlier the Master of the Merode Triptych, before the discovery of three other similar panels), was the first great master of Flemish and Early Netherlandish painting. Campin's identity and the attribution of the paintings in both the "Campin" and "Master of Flémalle" groupings have been a matter of controversy for decades. Read more on Wikipedia

Robert Campin is most famous for his work on the "Tomb of John the Fearless and Margaret of Bavaria" in 1425.

Among people born in 1375, Robert Campin ranks 1. After him are Richard of Conisburgh, 3rd Earl of Cambridge, William III, Duke of Bavaria, Janus of Cyprus, and Marie, Duchess of Auvergne. Among people deceased in 1444, Robert Campin ranks 2. Before him is Władysław III of Poland. After him are Leonardo Bruni, Bernardino of Siena, Olivera Despina, Mark of Ephesus, Julian Cesarini, John Beaufort, 1st Duke of Somerset, Joseph Albo, and Gianfrancesco I Gonzaga, Marquess of Mantua.