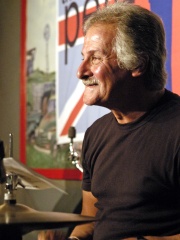 Randolph Peter Best (né Scanland; born 24 November 1941) is an English musician known as the drummer of the English rock band the Beatles immediately before the band achieved worldwide fame. Fired from the group in 1962 after playing drums as a Beatle for the previous two years in Germany and England, he started his own band, the Pete Best Four. He later joined and started many other bands over the years. Read more on Wikipedia

Pete Best is most famous for being the original drummer for the Beatles.

Among musicians, Pete Best ranks 124 out of 2,675. Before him are James Last, Till Lindemann, Fritz Kreisler, Tony Iommi, Don Shirley, and Compay Segundo. After him are Arnaut Daniel, Ray Manzarek, Chris Slade, Malcolm Young, Jascha Heifetz, and Nam June Paik.