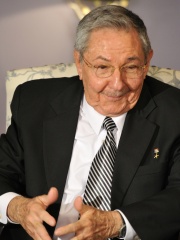 Raúl Modesto Castro Ruz (; American Spanish: [raˈul moˈðesto ˈkastɾo ˈrus]; born 3 June 1931) is a Cuban retired politician and general who served as the first secretary of the Communist Party of Cuba, the most senior position in the one-party communist state, from 2011 to 2021, succeeding his brother Fidel Castro. One of the military leaders of the Cuban Revolution, Castro served as the minister of the Armed Forces from 1959 to 2008. His ministerial tenure made him the longest-serving minister of the armed forces. Read more on Wikipedia

Raúl Castro is most famous for being the President of Cuba from 2008 to 2018.

Among politicians, Raúl Castro ranks 386 out of 15,710. Before him are Louis Bonaparte, Şehzade Mustafa, Artaxerxes I of Persia, Carl XVI Gustaf of Sweden, Vitellius, and Didius Julianus. After him are Mustafa II, José Mujica, Louis X of France, Javier Pérez de Cuéllar, Willy Brandt, and Tiberius Gracchus.