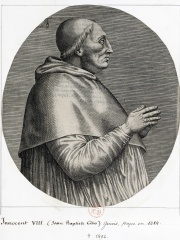 Pope Innocent VIII (Latin: Innocentius VIII; 1432 – 25 July 1492), born Giovanni Battista Cybo (or Cibo), was head of the Catholic Church and ruler of the Papal States from 29 August 1484 to his death. Son of the viceroy of Naples, Battista spent his early years at the Neapolitan court. He became a priest in the retinue of Cardinal Calandrini, half-brother to Pope Nicholas V (1447–55), Bishop of Savona under Pope Paul II, and with the support of Cardinal Giuliano Della Rovere. Read more on Wikipedia

Pope Innocent VIII is most famous for promulgating the Papal Bull of 1492, which expelled all Jews from the Papal States.

Among people born in 1432, Pope Innocent VIII ranks 2. Before him is Mehmed the Conqueror. After him are Afonso V of Portugal, Alvise Cadamosto, Isabel of Coimbra, Anne of Austria, Landgravine of Thuringia, Ahmad ibn Mājid, Bartolomeo Vivarini, Hōjō Sōun, and Luigi Pulci. Among people deceased in 1492, Pope Innocent VIII ranks 3. Before him are Lorenzo de' Medici and Piero della Francesca. After him are Elizabeth Woodville, Jami, Casimir IV Jagiellon, Gülbahar Hatun, Antoine Busnois, Jaume Huguet, and Sonni Ali.