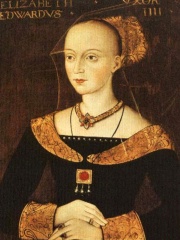 Elizabeth Woodville (also spelled Wydville, Wydeville, or Widvile) (c. 1437 – 8 June 1492) was queen of England as the spouse of King Edward IV from 1464 until his death in 1483. At the time of her birth, her family was of middle rank in the English social hierarchy. Her mother, Jacquetta of Luxembourg, had previously been an aunt-by-marriage to Henry VI. Read more on Wikipedia

Since 2007, the English Wikipedia page of Elizabeth Woodville has received more than 5,588,224 page views. Her biography is available in 37 different languages on Wikipedia making her the 86th most popular companion.

Among companions, Elizabeth Woodville ranks 85 out of 586. Before her are Yakov Dzhugashvili, Margaret of Austria, Queen of Spain, Anne Hathaway, Maria Feodorovna, Margaret Tudor, and Louise of Mecklenburg-Strelitz. After her are Isabella of Aragon, Queen of Portugal, Katharina von Bora, Soraya Esfandiary-Bakhtiary, Princess Alice, Duchess of Gloucester, Gala Dalí, and Elisabeth Christine of Brunswick-Wolfenbüttel.