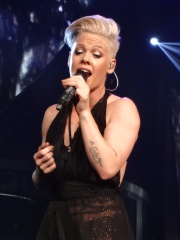 Alecia Beth Moore (born September 8, 1979), better known by her stage name Pink (stylized as P!nk), is an American singer, songwriter, dancer, actress, record producer, spokesperson, and model. She was originally a member of the girl group Choice. In 1995, LaFace Records saw potential in P!nk and offered her a solo recording contract. Read more on Wikipedia

Since 2007, the English Wikipedia page of Pink has received more than 1,961,102 page views. Her biography is available in 67 different languages on Wikipedia making her the 449th most popular singer.

Page views of Pinks by language

Among singers, Pink ranks 452 out of 3,001. Before her are LP, Bobby Solo, Gohar Gasparyan, Haddaway, Dusty Hill, and Taylor Swift. After her are Nino Ferrer, Natalia Oreiro, Faustina Bordoni, Jorge Negrete, Esther Ofarim, and Leila Mourad.