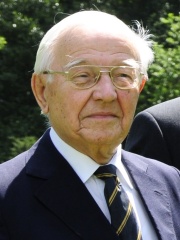 Petrus Jozef Sietse "Piet" de Jong (Dutch pronunciation: [ˈpeːtrɵs ˈjoːzəf ˈsitsə ˈpit də ˈjɔŋ]; 3 April 1915 – 27 July 2016) was a Dutch politician of the defunct Catholic People's Party (KVP) now the Christian Democratic Appeal (CDA) party and naval officer who served as Prime Minister of the Netherlands from 5 April 1967 to 6 July 1971.De Jong applied at the Royal Naval College in Den Helder and graduated as an Ensign in the Navy and joined the Submarine Service. During World War II he served on the submarine HNLMS O 24 as First Officer and later as Commanding officer and saw action in both the Battle of the Atlantic and the Pacific War. After the War De Jong served as a staff officer and commanded a frigate and destroyer. Read more on Wikipedia

Among politicians, Piet de Jong ranks 8,501 out of 15,577. Before him are Ii Naosuke, Alpaida, Sabinianus, Micheon of Goguryeo, Manea Mănescu, and Gerhard Klopfer. After him are Nikol Pashinyan, Hunald I, Miklós Németh, Sighere of Essex, Rauf Orbay, and Ferdinand von Bredow.