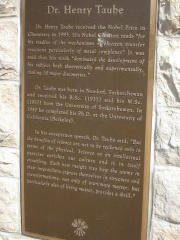 Henry Taube, Ph.D, M.Sc, B.Sc., FRSC (November 30, 1915 – November 16, 2005) was a Canadian-born American chemist noted for having been awarded the 1983 Nobel Prize in Chemistry for "his work in the mechanisms of electron-transfer reactions, especially in metal complexes." He was the second Canadian-born chemist to win the Nobel Prize, and remains the only Saskatchewanian-born Nobel laureate. Taube completed his undergraduate and Masters degrees at the University of Saskatchewan, and his Ph.D from the University of California, Berkeley. Read more on Wikipedia

Since 2007, the English Wikipedia page of Henry Taube has received more than 93,410 page views. His biography is available in 48 different languages on Wikipedia making him the 226th most popular chemist.