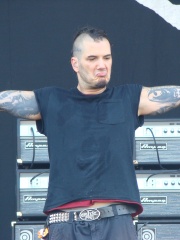 Philip Hansen Anselmo (born June 30, 1968) is an American heavy metal vocalist best known as the lead singer for Pantera, Down, and Superjoint, amongst other musical projects. He is the owner of Housecore Records. Anselmo is regarded as one of the greatest frontmen in metal history, known for being particularly animated and donning a machismo attitude that became emblematic of the general theme of Pantera. Read more on Wikipedia

Among singers, Phil Anselmo ranks 815 out of 3,541. Before him are Sami Yusuf, Riccardo Fogli, Dr. John, Gregg Allman, Michael Bublé, and The Weeknd. After him are Dennis Frederiksen, Lightnin' Hopkins, Guy Béart, Elaine Paige, Angelica Catalani, and Midge Ure.