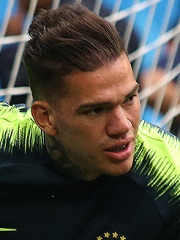 Ederson Santana de Moraes (born 17 August 1993), known as Ederson, is a Brazilian professional footballer who plays as a goalkeeper for Premier League club Manchester City and the Brazil national team. He is considered one of the best goalkeepers in the world. Ederson started his career at São Paulo in 2008 before joining Portuguese side Benfica one year later, where he would spend two seasons. Read more on Wikipedia

Since 2007, the English Wikipedia page of Ederson has received more than 51,650 page views. His biography is available in 42 different languages on Wikipedia (up from 39 in 2019). Ederson is the 3,128th most popular soccer player (down from 2,558th in 2019), the 603rd most popular biography from Brazil and the 319th most popular Brazilian Soccer Player.

Page views of Edersons by language