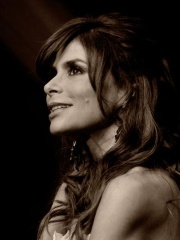 Paula Julie Abdul (born (1962-06-19)June 19, 1962) is an American singer, songwriter, dancer, choreographer, actress, and television personality. She began her career as a cheerleader for the Los Angeles Lakers at the age of 18 and later became the head choreographer for the Laker Girls, where she was discovered by The Jacksons. After choreographing music videos for Janet Jackson, Abdul became a choreographer at the height of the music video era and soon thereafter she was signed to Virgin Records. Read more on Wikipedia

Among singers, Paula Abdul ranks 846 out of 3,541. Before her are Minnie Riperton, Kate Ryan, Carlos do Carmo, Katja Ebstein, Odetta, and Valentina Tolkunova. After her are Kumar Sanu, Polad Bülbüloğlu, Eric Johnson, Liane Augustin, George London, and Anna Maria Jopek.