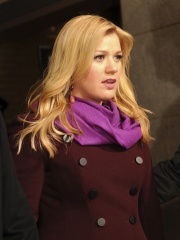 Kelly Brianne Clarkson (born April 24, 1982) is an American singer-songwriter, actress, author, and television personality. She rose to fame in 2002 after winning the first season of American Idol, which earned her a record deal with RCA Records. Clarkson's debut single, "A Moment Like This", topped the US Billboard Hot 100 chart and became the country's best-selling single of 2002. Read more on Wikipedia

Since 2007, the English Wikipedia page of Kelly Clarkson has received more than 12,243,843 page views. Her biography is available in 62 different languages on Wikipedia making her the 1,390th most popular singer.

Among singers, Kelly Clarkson ranks 1,397 out of 3,001. Before her are Hasmik Papian, Ezio Pinza, Joacim Cans, Thongchai McIntyre, Kim Deal, and Marty Robbins. After her are Polina Gagarina, Ava Max, Halsey, MØ, Whigfield, and Fat Joe.