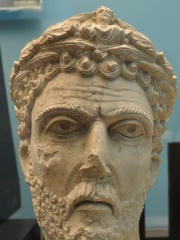 Septimius Odaenathus (Palmyrene: ['Dynt (Odainat)]; Arabic: أذينة‎ [Uḏaina]; c. 220 – 267) was the founder king (Mlk) of the Palmyrene Kingdom who ruled from Palmyra, Syria. He elevated the status of his kingdom from a regional center subordinate to Rome into a formidable state in the Near East. Read more on Wikipedia

Since 2007, the English Wikipedia page of Odaenathus has received more than 270,015 page views. His biography is available in 30 different languages on Wikipedia making him the 3,728th most popular politician.

Page views of Odaenathuses by language

Among politicians, Odaenathus ranks 3,705 out of 14,801. Before him are Kaykhusraw I, Maria of Castile, Queen of Aragon, Machaon, Huang Chao, Charles of Provence, and Countess Augusta Reuss of Ebersdorf. After him are Henri, Count of Paris, Hyrcanus II, Vladislaus II, Duke of Bohemia, Samsu-iluna, Nexhmije Hoxha, and Wenceslaus I, Duke of Luxembourg.