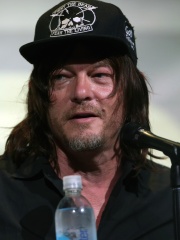 Norman Mark Reedus (born January 6, 1969) is an American actor, voice actor, television host, and model. Reedus is known for starring in the popular AMC horror drama series The Walking Dead as Daryl Dixon, in the film The Boondock Saints (1999) and its sequel The Boondock Saints II: All Saints Day (2009) as Murphy MacManus, as Scud in Marvel's Blade 2 (2002), Marco in Deuces Wild (2002) and for his AMC TV show Ride with Norman Reedus. He has acted in numerous films and television series, and modeled for various fashion designers (most recognizably Prada in the 1990s). Read more on Wikipedia

Since 2007, the English Wikipedia page of Norman Reedus has received more than 10,643,781 page views. His biography is available in 43 different languages on Wikipedia making him the 858th most popular actor.

Among actors, Norman Reedus ranks 849 out of 8,832. Before him are Dwight Schultz, Sissy Spacek, Jack Elam, Gong Li, Cillian Murphy, and Jim Parsons. After him are Jared Harris, Jeroen Krabbé, Til Schweiger, Johannes Heesters, River Phoenix, and Simon Baker.