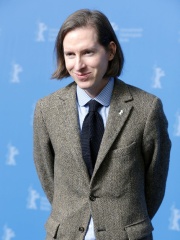 Wesley Wales Anderson (born May 1, 1969) is an American filmmaker. His films are known for their distinctive visual and narrative styles, and he is regarded by some critics as a modern-day example of the auteur. Three of his films—The Royal Tenenbaums, Moonrise Kingdom, and The Grand Budapest Hotel—appeared in BBC's 2016 poll of the greatest films since 2000.Anderson was nominated for the Academy Award for Best Original Screenplay for The Royal Tenenbaums in 2001, Moonrise Kingdom in 2012 and The Grand Budapest Hotel in 2014, as well as the Academy Award for Best Animated Feature for Fantastic Mr. Read more on Wikipedia

Since 2007, the English Wikipedia page of Wes Anderson has received more than 6,936,145 page views. His biography is available in 48 different languages on Wikipedia making him the 330th most popular film director.

Most Popular FILM DIRECTORS in Wikipedia