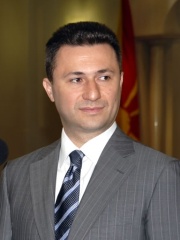 Nikola Gruevski (Macedonian: Никола Груевски [ˈnikɔɫa ˈɡruefski] (listen); Hungarian: Nikola Gruevszki born 31 August 1970) is a Macedonian politician who served as Prime Minister of Macedonia from 2006 until his resignation in 2016, due to a protests of that year, and led the VMRO-DPMNE party from 2004 to 2017. Under the Pržino Agreement mediated by the European Union, Gruevski agreed to resign and left his post on 18 January 2016.In May 2018 he was sentenced to two years in prison on corruption charges. In November 2018 he was ordered to serve his sentence but failed to check-in with authorities and instead fled to Hungary, where he sought and was granted political asylum.Gruevski has been accused of promoting the controversial identity politics called antiquization. Read more on Wikipedia