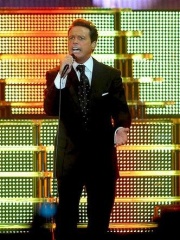 Luis Miguel Gallego Basteri (born 19 April 1970) is a Mexican singer of Spanish and Italian descent, often referred to as El Sol de México (The Sun of Mexico), which is the nickname his mother gave him as a child—"mi sol". Luis Miguel has sung in multiple genres and styles, including pop songs, ballads, boleros, tangos, jazz, big band, and mariachi. Miguel is also recognized as the only Latin singer of his generation to not cross over to the Anglo market during the "Latin Explosion" in the 1990s.Despite recording only in Spanish, he continued to be the best-selling Latin artist in the 1990s, and was credited for popularizing the bolero genre into the mainstream market. Read more on Wikipedia

Among SINGERS In Mexico