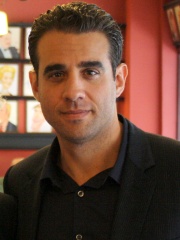 Robert Michael Cannavale (; born May 3, 1970) is an American actor known for various stage, television, and film roles, including regular or recurring roles in Third Watch, Boardwalk Empire, Vinyl, Will & Grace, Mr. Robot, and Master of None. Cannavale had a recurring role on the NBC comedy series Will & Grace as Will Truman's long-term boyfriend Officer Vincent "Vince" D'Angelo, for which he won the 2005 Primetime Emmy Award for Outstanding Guest Actor in a Comedy Series. Read more on Wikipedia

Since 2007, the English Wikipedia page of Bobby Cannavale has received more than 9,184,958 page views. His biography is available in 30 different languages on Wikipedia making him the 3,843rd most popular actor.

Among actors, Bobby Cannavale ranks 3,795 out of 8,832. Before him are Jeanne Eagels, Kevin Smith, Susanna Hoffs, Claudia Wells, Carla Laemmle, and Maribel Verdú. After him are Edie McClurg, Kristofer Hivju, Will Geer, Eleonora Giorgi, Anne Shirley, and Richard Simmons.