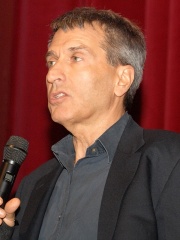 Nicholas Meyer (born December 24, 1945) is an American writer and director, known for his best-selling novel The Seven-Per-Cent Solution, and for directing the films Time After Time, two of the Star Trek feature films, the 1983 television film The Day After, and the 1999 HBO original film Vendetta. Meyer was nominated for an Academy Award for Best Adapted Screenplay for the film The Seven-Per-Cent Solution (1976), where he adapted his own novel into a screenplay. He has also been nominated for a Satellite Award, three Emmy Awards, and has won four Saturn Awards. Read more on Wikipedia

Since 2007, the English Wikipedia page of Nicholas Meyer has received more than 353,128 page views. His biography is available in 19 different languages on Wikipedia making him the 4,226th most popular writer.