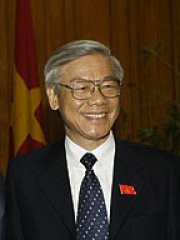 Nguyễn Phú Trọng (born 14 April 1944) is a Vietnamese politician who is the current General Secretary of the Communist Party of Vietnam, de facto top leader of Vietnam, in office since 19 January 2011, and President of Vietnam, de jure head of state of Vietnam, in office since 23 October 2018. He was Chairman of the National Assembly from 2006 to 2011, representing Hanoi, was elected General Secretary of the Communist Party of Vietnam at the party's 11th National Congress in 2011 and reelected at the 12th National Congress in 2016. As General Secretary, Trọng heads the party's Secretariat and is the Secretary of the Central Military Commission in addition to being the de facto head of the Politburo, the highest decision-making body in Vietnam, which currently makes him the most powerful person in Vietnam.In 3 October 2018, the Central Committee of the Communist Party of Vietnam formally nominated Trọng to be the next President of Vietnam to be voted on the next session of the National Assembly where the party holds an overwhelming majority, making him the third person to simultaneously head the party and the state after Ho Chi Minh and Trường Chinh. Read more on Wikipedia

Since 2007, the English Wikipedia page of Nguyễn Phú Trọng has received more than 655,688 page views. His biography is available in 36 different languages on Wikipedia making him the 2,830th most popular politician.

Among politicians, Nguyễn Phú Trọng ranks 2,812 out of 14,801. Before him are Emperor Go-Nara, Bill de Blasio, Arsinoe III of Egypt, Huáscar, Princess Benedikte of Denmark, and Prince George of Denmark. After him are Frederick II, Duke of Austria, Basarab I of Wallachia, Charles VII of Sweden, Qi of Xia, Emperor Go-Kashiwabara, and Lee Teng-hui.