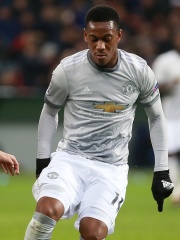 Anthony Jordan Martial (French pronunciation: ​[maʁsjal]; born 5 December 1995) is a French professional footballer who plays as a forward for Manchester United and the France national team. Playing youth football for Les Ulis, Martial began his professional career at Lyon, then transferred to AS Monaco in 2013 for a fee of €6 million. He was a member of Monaco's squad for two seasons, and signed for Manchester United in 2015 for an initial fee of £36 million which could potentially rise to £57.6 million; making it the highest fee paid for a teenager in football history at the time. Read more on Wikipedia