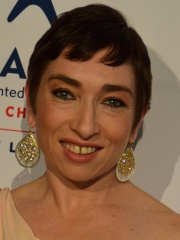 Naomi Grossman (born February 6, 1975) is an American actress, writer, and producer best known for her role as Pepper in the second and fourth seasons and also as Satanist Cardinal Samantha Crowe in the eighth season of the FX horror television series American Horror Story. Read more on Wikipedia

Since 2007, the English Wikipedia page of Naomi Grossman has received more than 1,568,518 page views. Her biography is available in 17 different languages on Wikipedia making her the 6,622nd most popular actor.