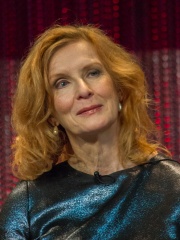 Frances Hardman Conroy is an American actress. She is best known for playing Ruth Fisher on the television series Six Feet Under (2001–2005), for which she won a Golden Globe and three Screen Actors Guild Awards, and received four Primetime Emmy Awards nominations for Outstanding Lead Actress in a Drama Series. She is also known for playing the older version of Moira O'Hara in season one of the television anthology series American Horror Story, which garnered Conroy her first Saturn Award for Best Supporting Actress on Television nomination, and as well a Primetime Emmy Awards nomination for Outstanding Supporting Actress in a Miniseries or a Movie. Read more on Wikipedia