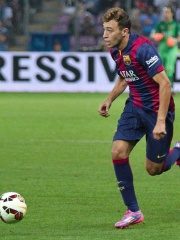 Munir El Haddadi Mohamed (born 1 September 1995), known simply as Munir (Spanish pronunciation: [muˈniɾ]), is a Spanish professional footballer who plays as a forward for Sevilla FC. Munir began his career in the youth ranks of Atlético Madrid before transferring to Barcelona in 2011, where he won the 2013–14 UEFA Youth League. He made his debut for the B-team in March 2014, and scored in his first match for the senior team in August of that year, at the start of a season in which they won the treble. Read more on Wikipedia

Since 2007, the English Wikipedia page of Munir El Haddadi has received more than 1,832,769 page views. His biography is available in 39 different languages on Wikipedia making him the 3,645th most popular soccer player.