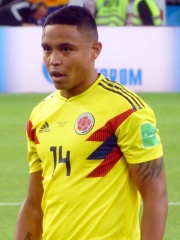 Luis Fernando Muriel Fruto (Spanish pronunciation: [ˈlwiz muˈɾjel]; born 16 April 1991) is a Colombian professional footballer who plays as a forward for Italian club Atalanta and the Colombian national team. Having started his professional career with Colombian side Deportivo Cali, Muriel joined Udinese. His first two seasons at the club saw him loaned out to Granada and Lecce respectively before returning to the club in 2012, during which year he won the Serie A Best Young Revelation award alongside Stephan El Shaarawy. Read more on Wikipedia

Since 2007, the English Wikipedia page of Luis Muriel has received more than 727,149 page views. His biography is available in 34 different languages on Wikipedia making him the 3,379th most popular soccer player.