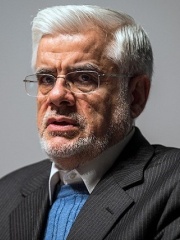 Mohammad Reza Aref (Persian: محمدرضا عارف, born 19 December 1951) is an Iranian engineer, academic and reformist politician who was the parliamentary leader of reformists' Hope fraction in the Iranian Parliament, representing Tehran, Rey, Shemiranat and Eslamshahr. Aref has also been heading the Reformists' Supreme Council for Policymaking since its establishment in 2015.He was the second first vice president from 2001 to 2005 under Mohammad Khatami. He previously served as Minister Information and Communications Technology and head of Management and Planning Organization in Khatami's first cabinet. Read more on Wikipedia