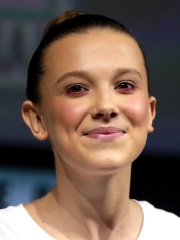 Millie Bobby Brown (born 19 February 2004) is an British actress, model and producer. At the age of twelve, she gained notability for her role as Jane "Eleven" Ives in the first season of the Netflix science fiction series Stranger Things (2016–present), which has been renewed for four seasons. For her portrayal as Eleven she has received two Primetime Emmy Award nominations for Outstanding Supporting Actress in a Drama Series in 2016 and 2017 and two Screen Actors Guild Award nominations for Outstanding Performance by a Female Actor in a Drama Series in 2017 and 2018. Read more on Wikipedia