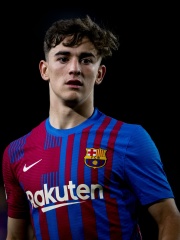 Since 2007, the English Wikipedia page of Gavi has received more than 61,605 page views. His biography is available in 27 different languages on Wikipedia. Gavi is the 6,795th most popular soccer player, the 2,092nd most popular biography from Spain and the 477th most popular Spanish Soccer Player.

The Times of India
FIFA World Cup: The ball is moving from Messi-Ronaldo to Mbappé-Gavi
Last Wednesday, in Spain’s 7-0 destruction of Costa Rica, Gavi outdid Messi. The former Barcelona and current Paris Saint-Germain Argentine was 18 years 357 days when he scored his first World Cup goal in 2006 against Serbia and Montenegro. Gavi’s volley off …
Boria Majumdar
The Irish Times
Mbappé, Gavi and other young World Cup stars prove the kids are alright
Kevin de Bruyne’s comments on Belgium’s high age profile ring true when compared to other teams
David Gorman

Page views of Gavis by language