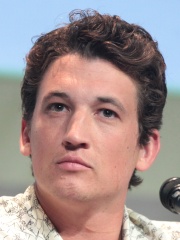 Miles Alexander Teller (born February 20, 1987) is an American actor. He is most widely recognized for his roles as jazz drummer Andrew Neiman in Damien Chazelle’s Whiplash and pilot Lt. Bradley "Rooster" Bradshaw in Top Gun: Maverick.Teller made his feature film debut in 2010 and soon gained recognition, most notably for his starring role in the 2013 coming-of-age film The Spectacular Now and the Divergent film trilogy (2014–2016), both opposite Shailene Woodley. Read more on Wikipedia

Livejournal.com
Grandma Teller thinks Miles Teller should be the next Bond
They’re looking for an actor to replace Daniel Craig for future 007 movies. I think my grandson, Miles Teller, has proven that he has everything they’re looking for- talent, looks, strength,worldwide appeal & oh, so cool. He can be that guy!! Wouldn’t he be g…
therearewords
Eonline.com
Tom Cruise Sends This Cake to Celebrity Friends Every Year: Miles Teller, Jon Hamm, Angela Bassett & More
We independently selected these products because we love them, and we think you might like them at these prices. E! has affiliate relationships, so we may get a commission if you purchase...
Marenah Dobin