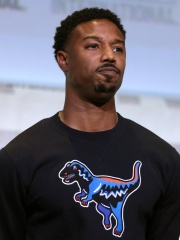 Michael Bakari Jordan (; born February 9, 1987) is an American actor and producer. He is known for his film roles as shooting victim Oscar Grant in the drama Fruitvale Station (2013), boxer Donnie Creed in Creed (2015), and Erik Killmonger in Black Panther (2018), all three of which were directed by Ryan Coogler. Jordan reprised the role of Creed in Creed II (2018), and is set to star, and make his directorial debut, in Creed III (2022).Jordan's initially broke out in television roles; including Wallace in first season of the HBO crime drama series The Wire (2002); Reggie Montgomery on the ABC soap opera All My Children (2003-2006) and Vince Howard in the NBC sports drama series Friday Night Lights (2009–2011). Read more on Wikipedia

IGN
Michael B. Jordan on Why Sylvester Stallone's Rocky Isn't in Creed 3
Creed 3 star and director Michael B. Jordan has shed some light as to why Sylvester Stallone will not be appearing in the next entry of the Rocky spin-off series.
Moneycontrol
Michael B. Jordan: on protest, power #39;Without Remorse#39;
The pandemic forced him time to put up his feet, but now Jordan says he is recharged and raring to go, with movies like his new 'Thomas Crown Affair' and the sequel to 'Without Remorse' on his mind.
Just Jared
Michael B. Jordan & Lori Harvey Glam Up in Prada for 'Without Remorse' Premiere at Home
Michael B. Jordan‘s new movie Tom Clancy’s Without Remorse is streaming now on Amazon Prime Video and since there was no red carpet premiere, he got dressed up at home with girlfriend Lori Harvey! The hot couple both wore looks from Prada while celebrating th…
Just Jared
Independent
Black Panther 2: Michael B Jordan addresses potential return to the MCU
Actor played the villain, Erik Killmonger, in the hit 2018 franchise film
Louis Chilton

Page views of Michael B. Jordans by language