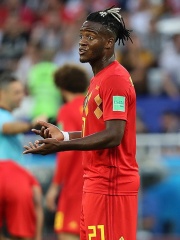 Michy Batshuayi-Atunga (born 2 October 1993) is a Belgian professional footballer who plays as a striker for Süper Lig club Fenerbahçe and the Belgium national team. Batshuayi began his professional career at Standard Liège in 2011, scoring 44 goals in 120 games across all competitions. His 21 goals in the 2013–14 Belgian Pro League made him the second-highest scorer and contributed to his Ebony Shoe Award. Read more on Wikipedia

Among soccer players, Michy Batshuayi ranks 2,773 out of 16,880. Before him are Sverre Hansen, Emre Can, Ramires, Teóphilo Bettencourt Pereira, Piermario Morosini, and Luigi Radice. After him are Nordin Amrabat, Landon Donovan, Josef Stroh, Ali Parvin, Johan Boskamp, and Wolfgang Kleff.