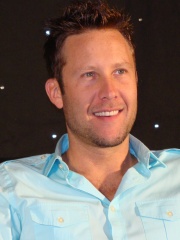 Michael Owen Rosenbaum (born July 11, 1972) is an American actor, director, producer, singer, podcaster and comedian. He is known for portraying Lex Luthor on the Superman television series Smallville, a role that TV Guide included in their 2013 list of "The 60 Nastiest Villains of All Time".Rosenbaum is also known for portraying Martinex in Guardians of the Galaxy 2, Parker in Urban Legend, Adam/Adina in Sorority Boys and Dutch Nilbog on Fox's Breaking In. He also has an extensive voiceover career in animation, such as his role of Wally West / The Flash in the DC Animated Universe series Justice League (2001–04) and its sequel Justice League Unlimited (2004–06). Read more on Wikipedia