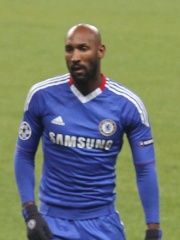 Nicolas Sébastien Anelka (French pronunciation: ​[nikɔla anɛlka]; born 14 March 1979) is a French professional football manager and retired player who played as a forward. As a player, he regularly featured in his country's national team, often scoring at crucial moments. Known for his ability to both score and assist goals, he has been described as a classy and quick player, with good aerial ability, technique, shooting, and movement off the ball, and was capable of playing both as a main striker and as a second striker.Anelka began his career at Paris Saint-Germain, but soon moved to Arsenal. Read more on Wikipedia