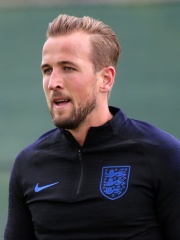 Harry Edward Kane (born 28 July 1993) is an English professional footballer who plays as a striker for Premier League club Tottenham Hotspur and captains the England national team. A prolific goalscorer with strong link play, Kane is regarded as one of the best strikers in the world and is Tottenham's second-highest all-time top goalscorer, tied for England's highest all-time top goalscorer, and the third-highest Premier League all-time top goalscorer.Born and raised in the London borough of Waltham Forest, Kane began his career at Tottenham Hotspur, where, after fast progression through the team's youth academy, he was promoted to the senior team in 2009, at age 16. He was loaned out to clubs across the English football pyramid, including Leyton Orient, Millwall, Leicester City, and Norwich City. Read more on Wikipedia