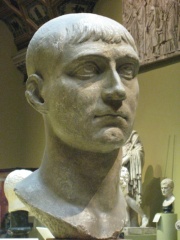 Since 2007, the English Wikipedia page of Maxentius has received more than 617,360 page views. His biography is available in 55 different languages on Wikipedia. Maxentius is the 805th most popular politician (down from 732nd in 2019).

Maxentius was a Roman Emperor who was in power from 306-312. He is most famous for being the son of Maximianus, who was the co-emperor of Rome with Diocletian.

Page views of Maxentiuses by language

Among politicians, Maxentius ranks 805 out of 15,710. Before him are Fahd of Saudi Arabia, Dick Cheney, Ivan VI of Russia, Nur ad-Din, Gordian III, and Scipio Aemilianus. After him are Henry III, Holy Roman Emperor, Thutmose II, Aldo Moro, Mary, Queen of Hungary, Charles II of England, and Frederick VIII of Denmark.