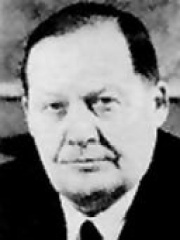 Mauno Pekkala (27 January 1890 – 30 June 1952) was a Finnish statesman and politician who served as Prime Minister from 1946 to 1948.Pekkala was a member of the Social Democratic Party of Finland and member of several wartime cabinets as Minister of Finance from December 1939 to February 1942. Pekkala left the party after the Continuation War. After the war, Pekkala joined the Finnish People's Democratic League (SKDL), an alliance of communists, socialists and social democrats. Read more on Wikipedia

Among politicians, Mauno Pekkala ranks 10,007 out of 15,710. Before him are Princess Alexandra, 2nd Duchess of Fife, Saw Maung, Nie Rongzhen, Pedro de Sousa Holstein, 1st Duke of Palmela, James S. Sherman, and Axel Pehrsson-Bramstorp. After him are Jioji Konrote, Ashur-nadin-apli, Mithridates I of the Bosporus, Alcetas, Adolphus Frederick IV, Duke of Mecklenburg-Strelitz, and Amalaberga.