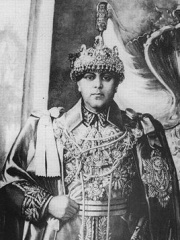 Tribhuwan Bir Bikram Shah (Nepali: त्रिभुवन वीर विक्रम शाह; 30 June 1906 – 13 March 1955) was King of Nepal from 11 December 1911 until his death. Born in Kathmandu, the capital city of Nepal, he ascended to the throne at the age of five, upon the death of his father, King Prithvi Bir Bikram Shah, and crowned on 20 February 1913 at the Nasal Chowk, Hanuman Dhoka Palace in Kathmandu, with his mother acting as regent. At the time, however, the position of monarch was mainly titular, with real power in the country residing in the powerful, conservative Rana family, which supplied the country with its hereditary prime minister. Read more on Wikipedia

Since 2007, the English Wikipedia page of Tribhuvan of Nepal has received more than 282,658 page views. His biography is available in 22 different languages on Wikipedia making him the 10,189th most popular politician.

Page views of Tribhuvan of Nepals by language

Among politicians, Tribhuvan of Nepal ranks 10,138 out of 14,801. Before him are Gisulf II of Friuli, Caspar Weinberger, Edward Hyde, 1st Earl of Clarendon, Roger Williams, Jamshid bin Abdullah of Zanzibar, and Şemsettin Günaltay. After him are Pacorus I, Kevin Rudd, Alexander von Benckendorff, Margaret Taylor, Pál Losonczi, and Walter Hauser.

Among POLITICIANS In Nepal