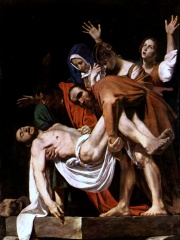 According to the Gospel of John, Mary of Clopas (Ancient Greek: Μαρία ἡ τοῦ Κλωπᾶ, María hē tou Clōpá) was one of the women present at the crucifixion of Jesus and bringing supplies for his funeral. The expression Mary of Clopas in the Greek text is ambiguous as to whether Mary was the daughter or wife of Clopas, but exegesis has commonly favoured the reading "wife of Clopas". Hegesippus identified Clopas as a brother of Saint Joseph. Read more on Wikipedia

Mary of Clopas is most famous for being the sister of Mary Magdalene. She is also the wife of Cleophas, and the mother of James the Less.

Page views of Mary of Clopas by language

Among politicians, Mary of Clopas ranks 3,691 out of 15,577. Before her are Sundiata Keita, Emperor Wuzong of Tang, Reynaldo Bignone, Qi of Xia, Ayşe Sultan, and Hormizd II. After her are Vologases I of Parthia, Prince Alexander of Hesse and by Rhine, Ahmad ibn Tulun, Charibert II, Oleg Penkovsky, and Nicholas Kanabos.

Among people born in 100 BC, Mary of Clopas ranks 25. Before her are Titus Labienus, Thusnelda, Valerius Maximus, Antipater the Idumaean, Publilius Syrus, and Artavasdes II of Armenia. After her are Judas of Galilee, Antigonus II Mattathias, Phraates V, Marcus Antistius Labeo, Vonones I, and Tigranes III. Among people deceased in 1, Mary of Clopas ranks 2. Before her is Saint Veronica. After her are Tigranes IV, Domitilla the Elder, Cleomedes, Agrippa, Terentius Maximus, and Zenobia of Armenia.