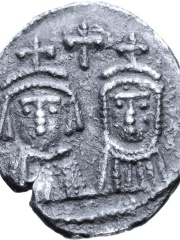 Martina (Greek: Μαρτίνα; died after 641) was an empress of the Byzantine Empire, the second wife of her uncle the emperor Heraclius, and regent in 641 with her son. She was a daughter of Maria, Heraclius' sister, and a certain Martinus. Read more on Wikipedia

Since 2007, the English Wikipedia page of Martina has received more than 56,353 page views. Her biography is available in 22 different languages on Wikipedia (up from 19 in 2019). Martina is the 7,392nd most popular politician (up from 9,866th in 2019), the 636th most popular biography from Turkey and the 300th most popular Turkish Politician.

Page views of Martinas by language

Among politicians, Martina ranks 7,392 out of 15,710. Before her are Clyde Tolson, Lord Guildford Dudley, Leonid Krasin, Antonis Samaras, Leopold II, Prince of Anhalt-Dessau, and Princess Caroline of Denmark. After her are Thiệu Trị, Mieszko I Tanglefoot, Fakhruddin Ali Ahmed, Zawisza Czarny, Kim Yo-jong, and Andronikos Doukas.