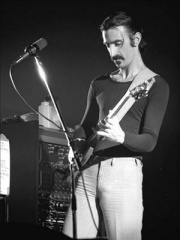 Frank Vincent Zappa (December 21, 1940 – December 4, 1993) was an American musician, composer, guitarist, singer, songwriter and bandleader. His work is characterized by nonconformity, free-form improvisation, sound experiments, musical virtuosity and satire of American culture. In a career spanning more than 30 years, Zappa composed rock, pop, jazz, jazz fusion, orchestral and musique concrète works, and produced almost all of the 60-plus albums that he released with his band the Mothers of Invention and as a solo artist. Read more on Wikipedia

Frank Zappa is most famous for his eclectic and experimental music.

Among musicians, Frank Zappa ranks 26 out of 2,675. Before him are Brian May, Cat Stevens, Chuck Berry, Eric Clapton, Mark Knopfler, and Jeff Beck. After him are Giuseppe Tartini, Władysław Szpilman, Ronnie James Dio, Bon Scott, Miles Davis, and Scatman John.