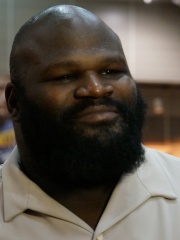 Mark Jerrold Henry (born June 12, 1971) is an American powerlifter, Olympic weightlifter, strongman, and retired professional wrestler, who is currently signed to WWE under a Legends contract. He also works backstage as a producer. He is a two-time Olympian (1992 and 1996) and a gold, silver, and bronze medalist at the Pan American Games in 1995. As a powerlifter, he was WDFPF World Champion (1995) and a two-time U.S. Read more on Wikipedia

Since 2007, the English Wikipedia page of Mark Henry has received more than 3,731,653 page views. His biography is available in 31 different languages on Wikipedia making him the 100th most popular wrestler.