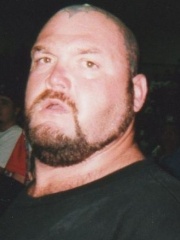 Scott Charles Bigelow (September 1, 1961 – January 19, 2007) was an American professional wrestler, better known by the ring name Bam Bam Bigelow. Recognizable by his close to 400-pound frame and the distinctive flame tattoo that spanned most of his bald head, Bigelow was hailed by former employer WWE in 2013 as "the most natural, agile and physically remarkable big man of the past quarter century", while former co-worker Bret Hart described him as "possibly the best working big man in the business."Bigelow is best known for his appearances with New Japan Pro-Wrestling (NJPW), the World Wrestling Federation (WWF), World Championship Wrestling (WCW), and Extreme Championship Wrestling (ECW) between 1987 and 2001. Over the course of his career, he held championships including the ECW World Heavyweight Championship, the ECW World Television Championship, the IWGP Tag Team Championship, and the WCW World Tag Team Championship. Read more on Wikipedia

Since 2007, the English Wikipedia page of Bam Bam Bigelow has received more than 1,811,279 page views. His biography is available in 19 different languages on Wikipedia making him the 107th most popular wrestler.