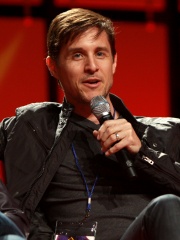 Yuri Lowenthal (born March 5, 1971) is an American voice actor, producer and screenwriter known chiefly for his work in cartoons, anime and video games. Some of his prominent roles in animations and anime include Sasuke Uchiha in Naruto, teenage Ben Tennyson in Ben 10, Jinnosuke in Afro Samurai, Simon in Gurren Lagann and Suzaku Kururugi in Code Geass. In video games, he voices The Prince in Ubisoft's Prince of Persia, Alucard in Castlevania, Hayate/Ein in Dead or Alive, Matt Miller in Saints Row, the protagonist in Persona 3, Joseph Oda in The Evil Within, Yosuke Hanamura in Persona 4, Marth in Fire Emblem, Peter Parker / Spider-Man in Insomniac's Spider-Man and Spider-Man: Miles Morales and Luka in Bayonetta. Read more on Wikipedia