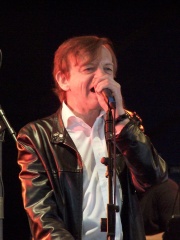 Mark Edward Smith (5 March 1957 – 24 January 2018) was an English singer and songwriter, who was the lead singer, lyricist and only constant member of the post-punk group the Fall. Smith formed the band after attending the June 1976 Sex Pistols gig in Manchester and was its leader until his death. During their 42-year existence, the Fall's line-up included some 60 musicians with whom Smith released 32 studio albums and numerous singles and EPs.Smith had a difficult and complex personality and was a long-term alcoholic. Read more on Wikipedia

Since 2007, the English Wikipedia page of Mark E. Smith has received more than 1,075,827 page views. His biography is available in 16 different languages on Wikipedia making him the 1,907th most popular singer.

Among singers, Mark E. Smith ranks 1,917 out of 3,001. Before him are Eva Simons, Ashlee Simpson, Mai Charoenpura, Alma, JoJo, and Florence Welch. After him are James Morrison, Redman, Wendy, Agnes Carlsson, Guildo Horn, and Mario Frangoulis.