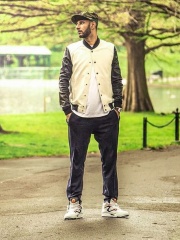 Kasseem Daoud Dean (born September 13, 1978), known professionally as Swizz Beatz, is an American record producer, rapper, and record executive. Born and raised in New York City, Dean embarked on his musical career as a DJ. At the age of 18, he started to gain recognition in the hip hop industry through his family's record label, Ruff Ryders, as well as his friendship and work with East Coast rapper DMX. Working with DMX as his producer, DJ and hype man helped Dean gain prominence as a high-profile personality in hip hop. Dean later found a protégé in Philadelphia-based rapper Cassidy, whose success helped the launch of his own label imprint, Full Surface, in 2001. Read more on Wikipedia