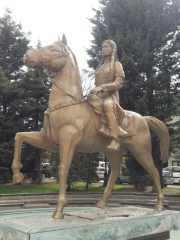 Malhun Hatun (also called Mal Hatun; d. November 1326) was the first wife of Osman I, the leader of the Ottoman Turks and the founder of the dynasty that established and ruled the Ottoman Empire. Read more on Wikipedia

Malhun Hatun is most famous for being the wife of the Ottoman Sultan Bayezid II.

Among companions, Malhun Hatun ranks 137 out of 687. Before her are Caterina Sforza, Olga Constantinovna of Russia, Priscilla Presley, Marie Adélaïde of Savoy, Caroline of Baden, and Mumtaz Mahal. After her are Maria Luisa of Savoy, Sophia Dorothea of Hanover, Albert VII, Archduke of Austria, Gorgo, Queen of Sparta, Alexandrine of Mecklenburg-Schwerin, and Maria Eleonora of Brandenburg.

Among people born in 1350, Malhun Hatun ranks 7. Before her are Pope Boniface IX, John of Nepomuk, Manuel II Palaiologos, Miloš Obilić, Dmitry Donskoy, and Vincent Ferrer. After her are Margaret III, Countess of Flanders, John I of Aragon, Pierre d'Ailly, Ivan Shishman of Bulgaria, Inca Roca, and Qara Osman. Among people deceased in 1324, Malhun Hatun ranks 2. Before her is Marco Polo. After her are Marie of Luxembourg, Queen of France, Emperor Go-Uda, Henry II of Jerusalem, Dino Compagni, and Irene of Brunswick.