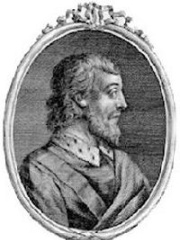 Malcolm I of Scotland

Máel Coluim mac Domnaill (anglicised Malcolm I) (died 954) was king of Alba (before 943 – 954), becoming king when his cousin Constantine II abdicated to become a monk. He was the son of Donald II. Máel Coluim was probably born during his father's reign (889–900). By the 940s, he was no longer a young man, and may have become impatient in awaiting the throne. Read more on Wikipedia

Page views of Malcolm I of Scotlands by language

Among politicians, Malcolm I of Scotland ranks 6,560 out of 15,710. Before him are Jean-Baptiste Carrier, Antti Aarne, Giulio Alberoni, Kurt Schumacher, Mirsaid Sultan-Galiev, and Bolesław IV the Curly. After him are Christian I, Prince of Anhalt-Bernburg, Friedrich Karl Ludwig, Duke of Schleswig-Holstein-Sonderburg-Beck, Robert Devereux, 2nd Earl of Essex, Dominique de Villepin, Thorvald Stoltenberg, and Étienne Charles de Loménie de Brienne.