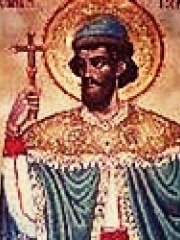 Saint Enravota (Bulgarian: Свети Енравота) or Voin (Воин, "warrior") or Boyan (Боян) was the eldest son of Omurtag of Bulgaria and the first Bulgarian Christian martyr, as well as the earliest Bulgarian saint to be canonized. Born in the early 9th century, Enravota was the elder brother of Malamir of Bulgaria, who succeeded their father Omurtag to the Bulgarian throne in 831. Enravota was possibly deprived of the throne because he favoured Christianity, which the boyars feared might endanger the court. Read more on Wikipedia

Since 2007, the English Wikipedia page of Enravota has received more than 15,009 page views. His biography is available in 15 different languages on Wikipedia. Enravota is the 1,646th most popular religious figure.

Page views of Enravotas by language

Among religious figures, Enravota ranks 1,646 out of 2,272. Before him are Hans Hermann Groër, Jeralean Talley, Benjamin I of Constantinople, Nirmala Srivastava, Karekin I, and Ricardo María Carles Gordó. After him are Johannes Cocceius, Laurent Monsengwo Pasinya, Ignatius Gabriel I Tappouni, Antonio Caggiano, Shunryū Suzuki, and Bartolomé Carranza.